Water - in a class of its own

The Biological Significance of Water

Water is such a common everyday substance that we often do not consider its significance in biological systems.

Active cells contain water, and are surrounded by a film of liquid which is principally water.

From a Biological point of view, water is important for a number of reasons:

As a metabolite: Water is involved in many (bio)chemical reactions inside cells - metabolism.

For example, the chemical reactions of condensation and hydrolysis involve the removal and addition of water, and water is essential for the light-dependent reactions of photosynthesis.

As a solvent: many biological and inorganic chemicals dissolve in water, and can be transported and react with other chemicals within cells (and in laboratory test-tubes).

In the transpiration stream, water is drawn up by leaves of trees rather than being pushed up from below
A number of unusual physical properties are a direct consequence of cohesion between water molecules due to hydrogen bonds formed between -H and -O- of different water molecules.

This makes water useful for storing heat energy, and stabilises temperature within bodies of water (ponds, lakes, seas) as well as the bodies of animals.

Water has a large latent heat of vaporisation. This permits efficient cooling by means of sweating.

This pond skater does better than walking on water


Water shows cohesive properties. This allows long columns of water to be formed and drawn up in the vascular tissue of trees (and smaller plants). It is also responsible for surface tension where water meets air - an important feature for small pond insects, and in the functioning of lungs.

Freezing on top, but not (quite) so cold below
In addition water is unusual in that its solid form - ice - has a lower density than the liquid form, so it floats. It forms an insulating layer at the top of ponds and lakes, with water beneath at an even 4 °C.

This is fairly crucial for fish and other water life because they can continue to live and move in the rather cold water under the ice.

The ball and stick display shows oxygen as a red sphere, hydrogens as white spheres, with covalent bonds between
Water is hydrogen oxide H2O.
The 2 hydrogen atoms are at an angle from the oxygen atom.
Oxygen has 6 electrons in its outer shell, and so there are 2 positions which can be shared with 2 hydrogens each of which provides a single electron. Although the water molecule is electrically neutral overall, there is an uneven charge distribution on the outside of the molecule: usually written as δ- on the oxygen , δ+ on the hydrogens (delta means a small change). Thus the molecule is described as polar.

Hydrogen and oxygen are held together by covalent bonds, and water is often seen as a provider of -H and -OH (hydroxyl groups) in biochemical reactions.
A small proportion of water molecules dissociate to form hydrogen ions and hydroxide ions:

H2O ⇋ H+ + OH-
These ions can participate in metabolic reactions,and can be replaced as they are in chemical equilibrium with H2O.

When water acts as a solvent, ions such as Na+ and Cl- become surrounded by a shell (or more than one shell) of water molecules (facing 'in' or 'out' depending on the ionic charge). This process is called solvation, and it allows each ion to drift apart (independent from oppositely charged partner ions) and become distributed amongst the body of the water, forming a solution.

Hydrophilic compounds owe their properties to ionisable groups carboxylic acid (-COOH), amino (-NH2), and covalent -OH groups, all of which interact with water. These include sugars like glucose, amino acids like glycine, and salts like sodium chloride. Hydrophobic compounds are generally similar to hydrocarbons, with large numbers of carbon atoms surrounded by hydrogens. Lipids are the main group of biological compounds in this category.

"Hydrogen bonds" between electronegative and electropositive groups (/O\ and -H in this case) are attractive forces, less powerful than covalent bonds. They work over short distances, and are easily broken (and re-formed) as water molecules move. Since H2O is such a small molecule, such bonding sites are usually not far away.
Each water molecule can form up to 4 hydrogen bonds with neighbouring molecules, so there is quite a strong cohesive force within the body of the liquid.

As temperature rises, the absorption of heat involves the progressive breaking of hydrogen bonds, allowing water molecules to move more freely. But this requires more (heat) energy than is needed simply to speed up molecular movement of water.

In order to turn liquid water into vapour, enough (heat) energy must be supplied to speed up the molecular movement so that water molecules escape from the liquid surface, which explains the high latent heat of vaporisation.

At the liquid surface cohesive forces pull inwards from side to side, and downwards (because there are practically no water molecules above) forming a sort of elastic skin on the suface - surface tension.

A section of ice

Dotted blue lines show hydrogen bonds
In ice, cohesive forces are more obvious, even though hydrogen bonds are formed at greater distances. Here water molecules interlock forming hexagonal (6-sided) shapes. Each hexagon has oxygen at its corners, which alternate in projecting slightly above and below the "ring" so that it is almost flat, and collectively many such hexagons make a flat sheet. Other hexagonal sections extend out of the plane of the sheet (to the front and back) and unite forming other sheets of hexagons.
This results in a fairly open honeycomb-like structure, explaining the solidity and reduced density of ice.
Incidentally, this flat octagonal motif goes a certain way to explaining the structure of snowdrops. 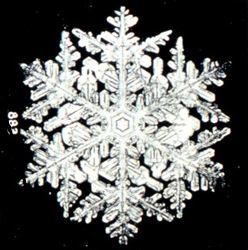 The building up of identical crystalline sections gives rise to central sections from which six feathery spokes radiate. Each of these sections are built up from slightly different combinations of small crystals resulting in broadly symmetrical structures, each with fractal patterns, but each snowflake is competely individual.

Other related topics on this site

(also accessible from the drop-down menu above)
This series (Biological chemicals):

Why is water such a good solvent?

Why does ice float?

M2: All About Water - is a very informative article from a number of levels

Hydrogen Bonding & the Anomalous Properties of Water - Another article from a chemical point of view, comparing H2O with H2X

How do snowflakes form? Get the science behind snow